Are you a plant collector?  Do you have more plants than you have space for?  If you answered yes to either of these questions, then you need a window plant shelf! 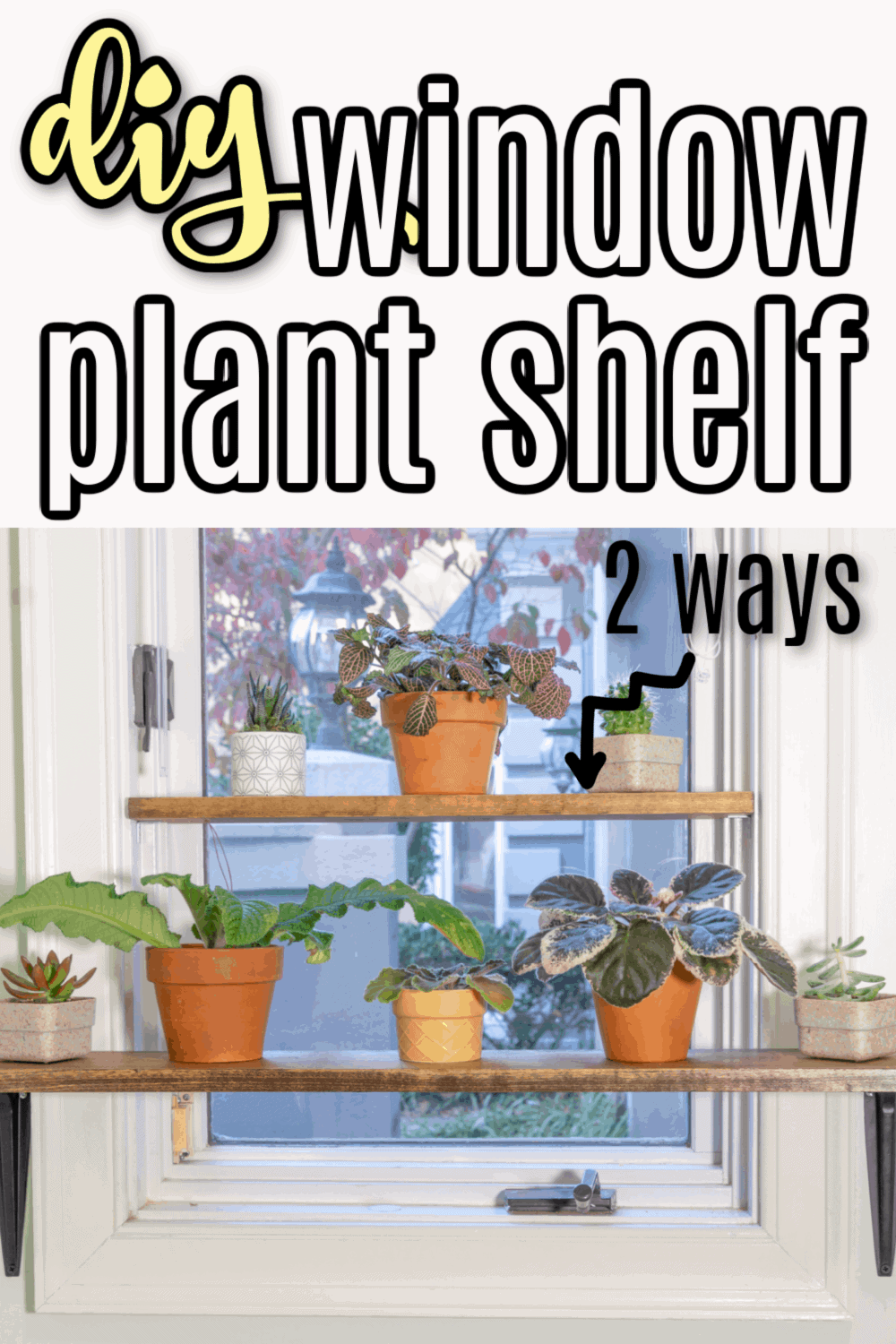 I don’t really have a particularly green thumb.  I have never been able to keep houseplants alive for any substantial amount of time, and truthfully, I have never really tried that hard to do so because I have cats…and kids.  And plants are a lot of work.  I mean, you have to water them like once a week.  Sometimes even twice in one week! 😆

This past summer, on a bit of a whim, I decided I wanted to put a small window plant shelf in our laundry room window.  Our laundry room faces southwest and gets some good light in the afternoon.  It’s also one of the only windows in our house that doesn’t extend nearly to the floor; therefore, it is high enough to be cat and kid proof (for now….).  So, I went out and bought a few small plants and crossed my fingers that they would last longer than a week.

I then made a small shelf to fit inside the window frame.  I didn’t figure I needed that much room, because as I stated above, I don’t have a gift for plants.

Much to my surprise, a few months later, most of them were still alive!  Then, in September, I bought a few more from a neighbor who is part of a plant club here in town.  At that point, I realized a needed another shelf to accommodate the plants I had collected.

And now, I have space for all my plants. 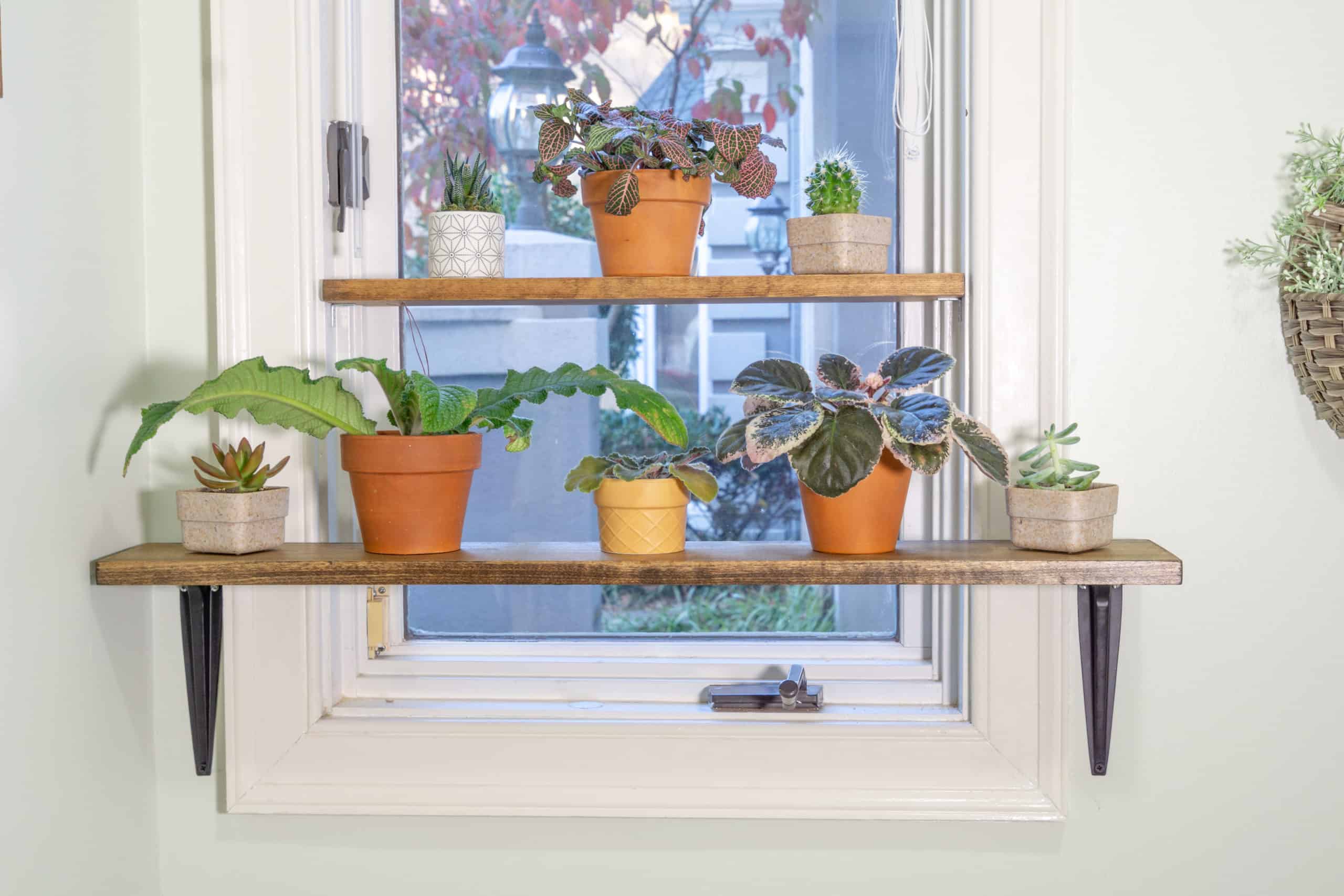 This is a step-by-step of how I created the larger, outside mount shelf. 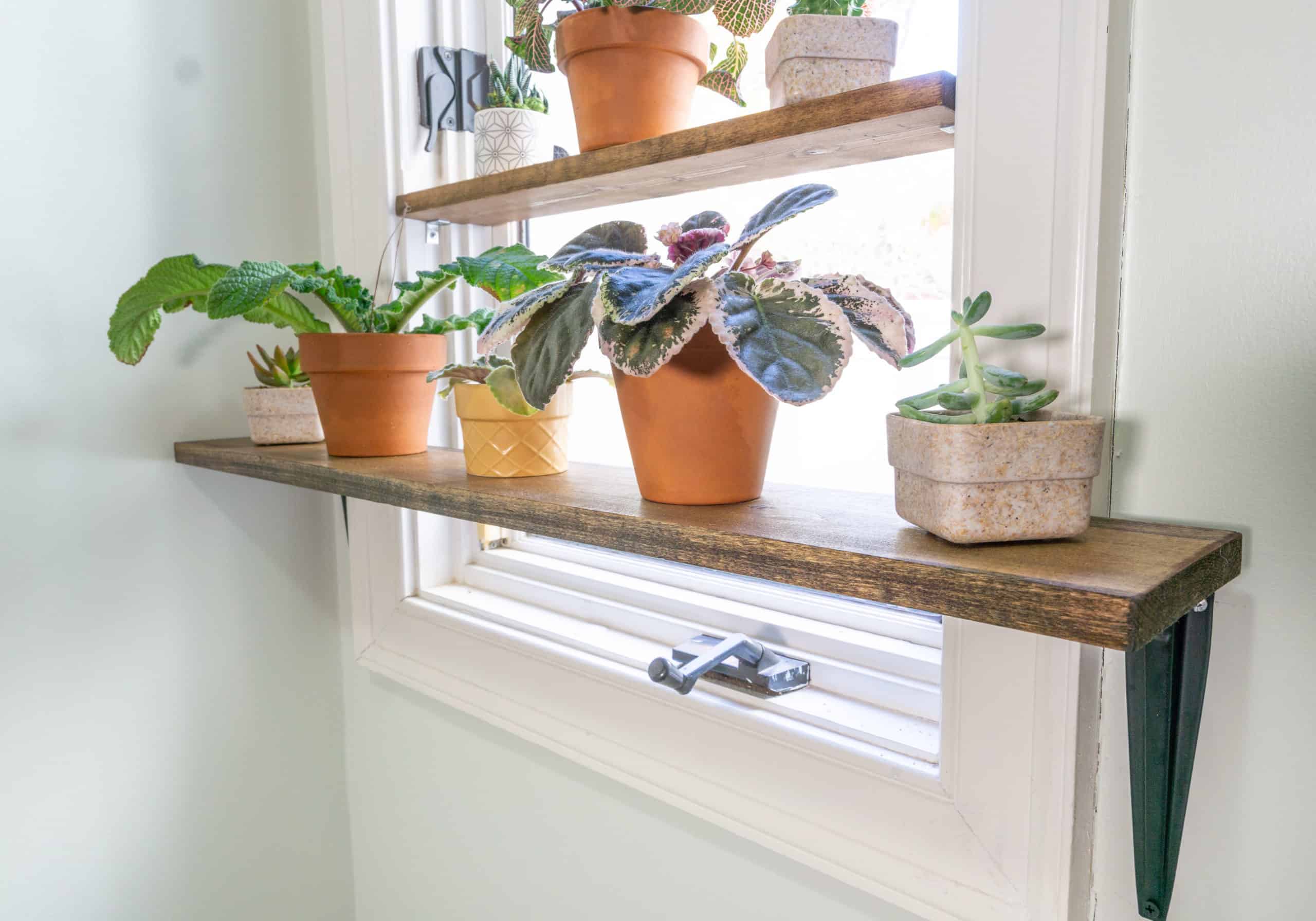 You will need to figure out how wide you want your shelf based on the size of your window.  The board will need to extend at least two inches beyond each side of the window frame in order to attach to the shelf brackets.  Because my window is in a corner, I could only take it out about 2.5″ on each side.  But you could always extend it farther than that, if you have room.

The shelf that I made was 34″ wide.  I measured and marked my board, then made one easy cut with the miter saw 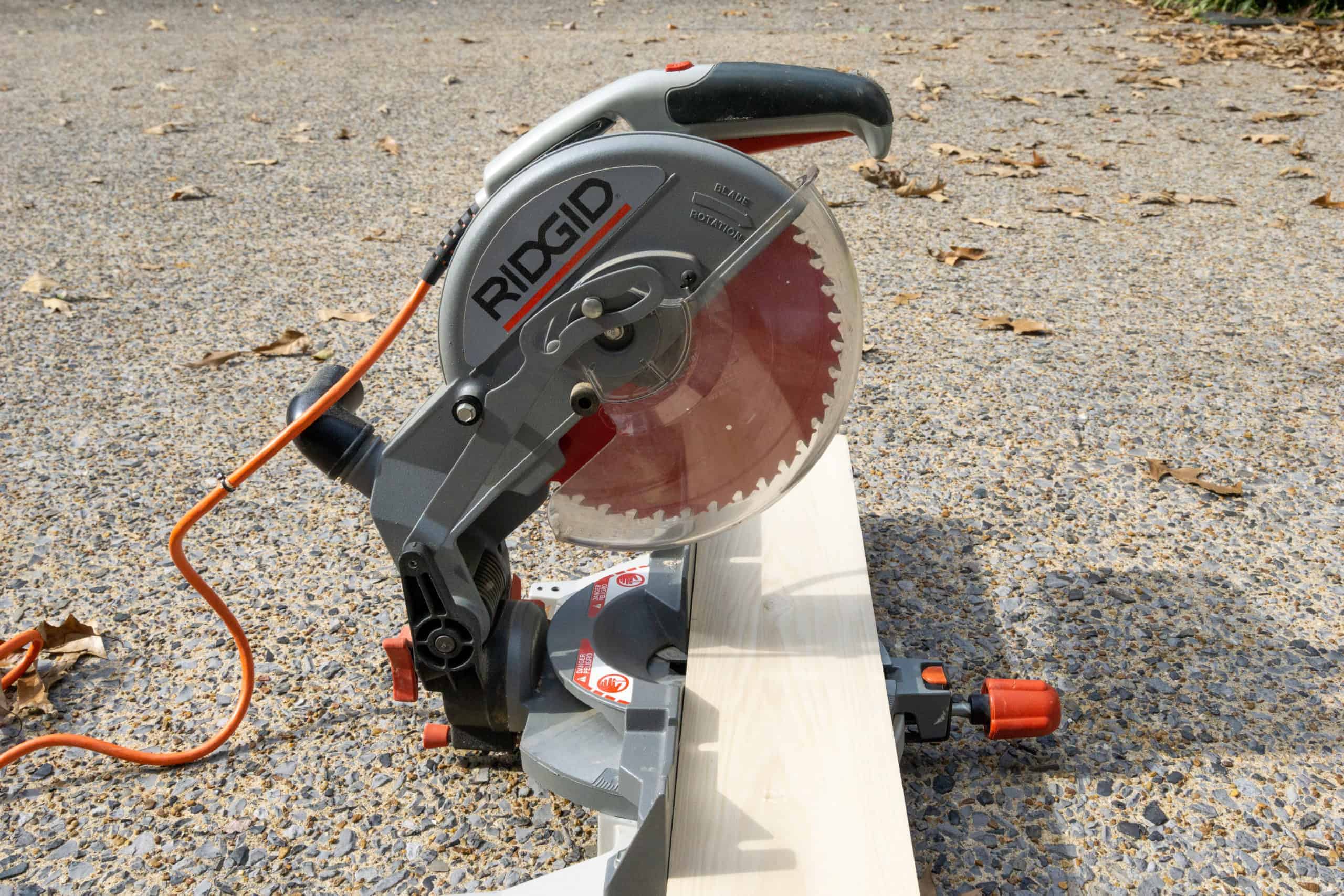 After cutting it down to size, I sanded the rough edges on the cut end, and then, very lightly, sanded all of the rest of the edges to soften them just a tad.

I chose to stain my shelf, but you could leave it unfinished or even paint it.

I used one of my favorite stain colors – Minwax Provincial

– and put one coat of stain on according to the directions on the can. 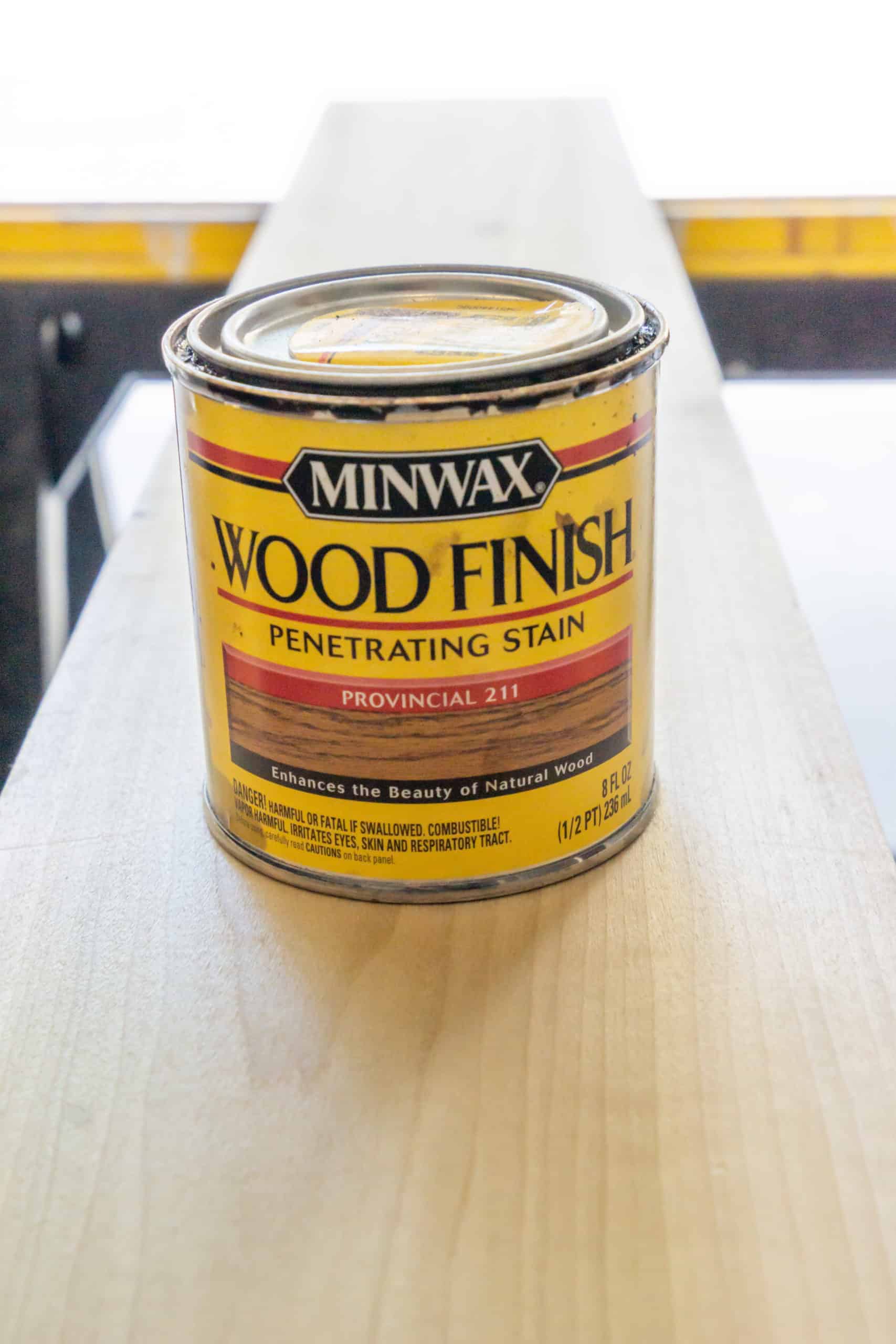 Step 3 – Customize the Brackets (if needed) 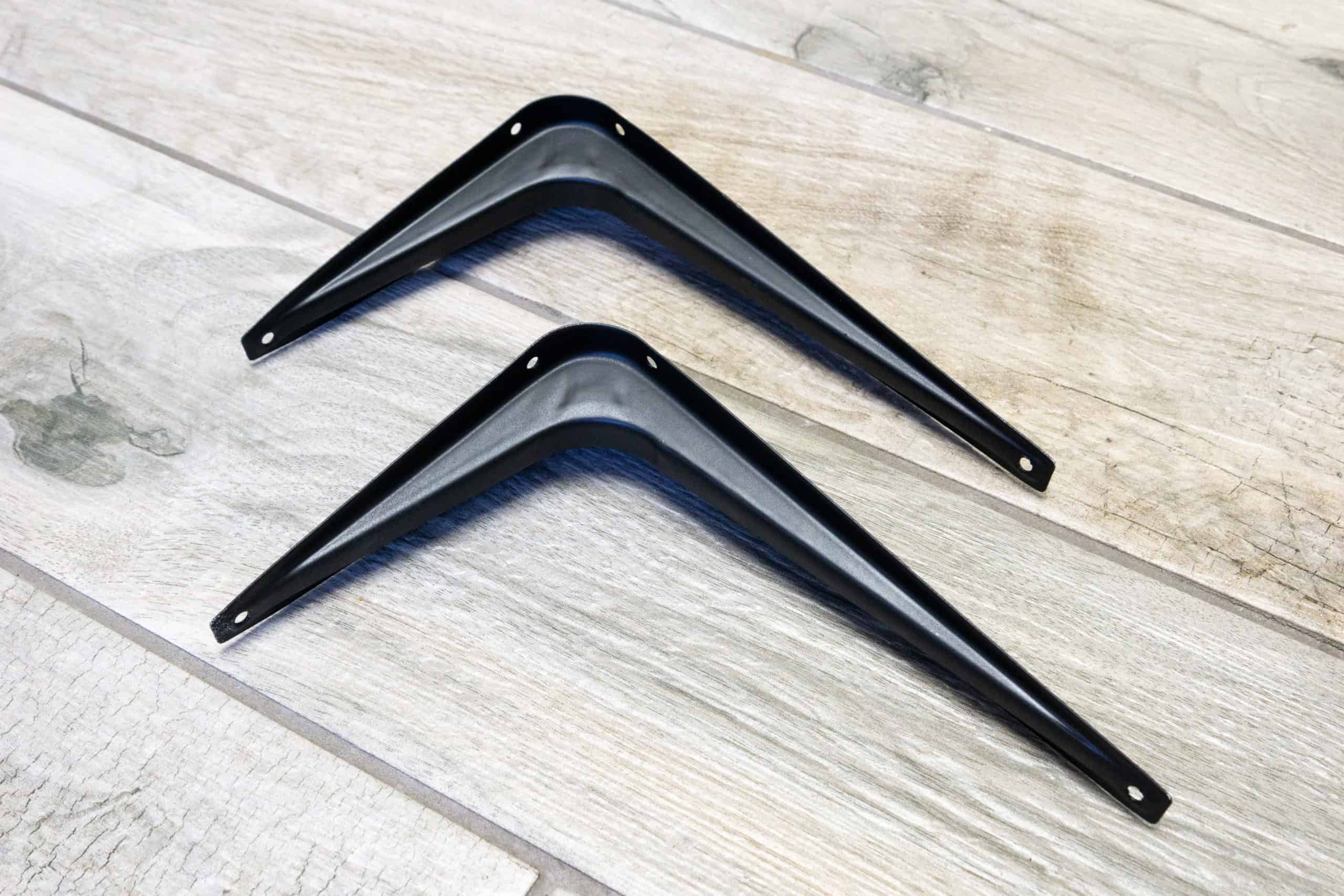 Then, we had to drill extra holes in them.  The trim around our windows is pretty deep.  So, the pre-drilled holes on the brackets were actually behind the edge of the window frame. 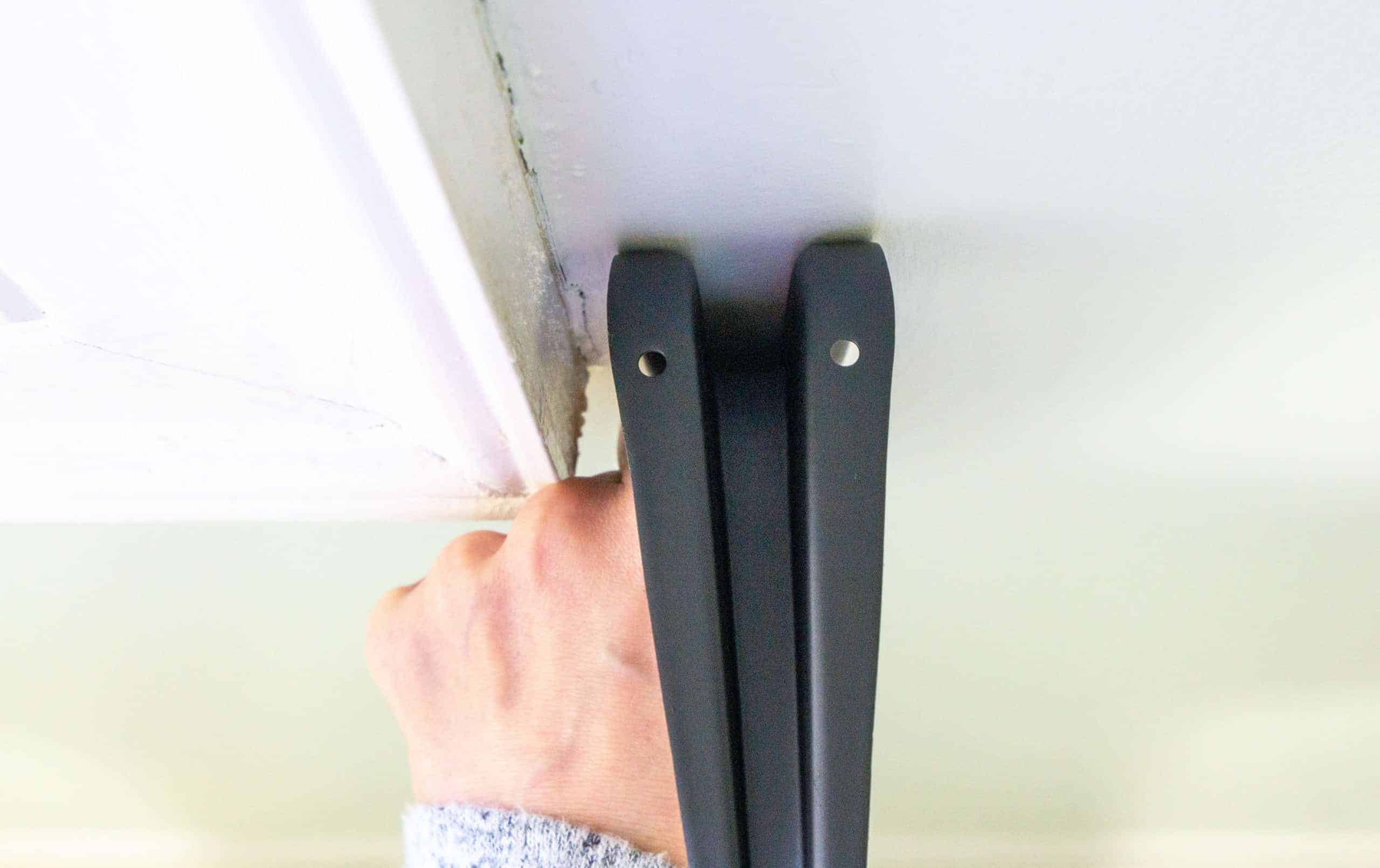 Therefore, we wouldn’t have been able to secure the shelf board into those holes.  So, we simply used our drill to add a couple of holes that fell in front of the edge of the window frame.  That way, we could attach the shelf board securely to the brackets. 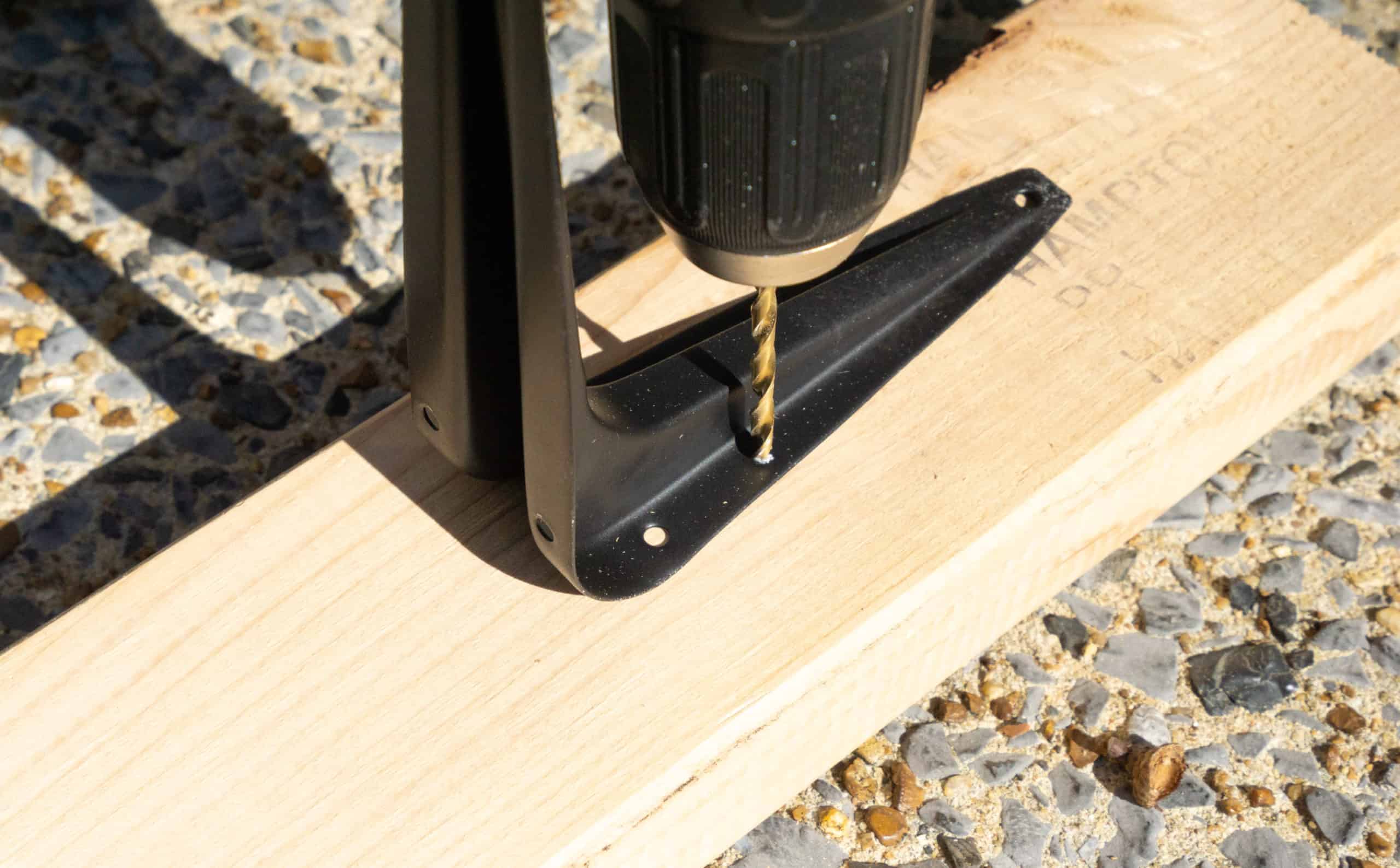 Then, we installed the brackets on the wall.

I, unfortunately, don’t have a laser level

, which would have been super helpful with installation.  So, here’s what I did.

I held the board up to the window approximately where I wanted it to be, and used a regular level to make sure it (the board) was level.  Then, I drew a short line on the wall on either side of the window frame along the top of the board.  That way, I could make my measurements for the shelf brackets from the pencil line, which I knew was level.  (Hopefully that makes sense.)

Then, using drywall anchors and screws

, we installed them on the wall. 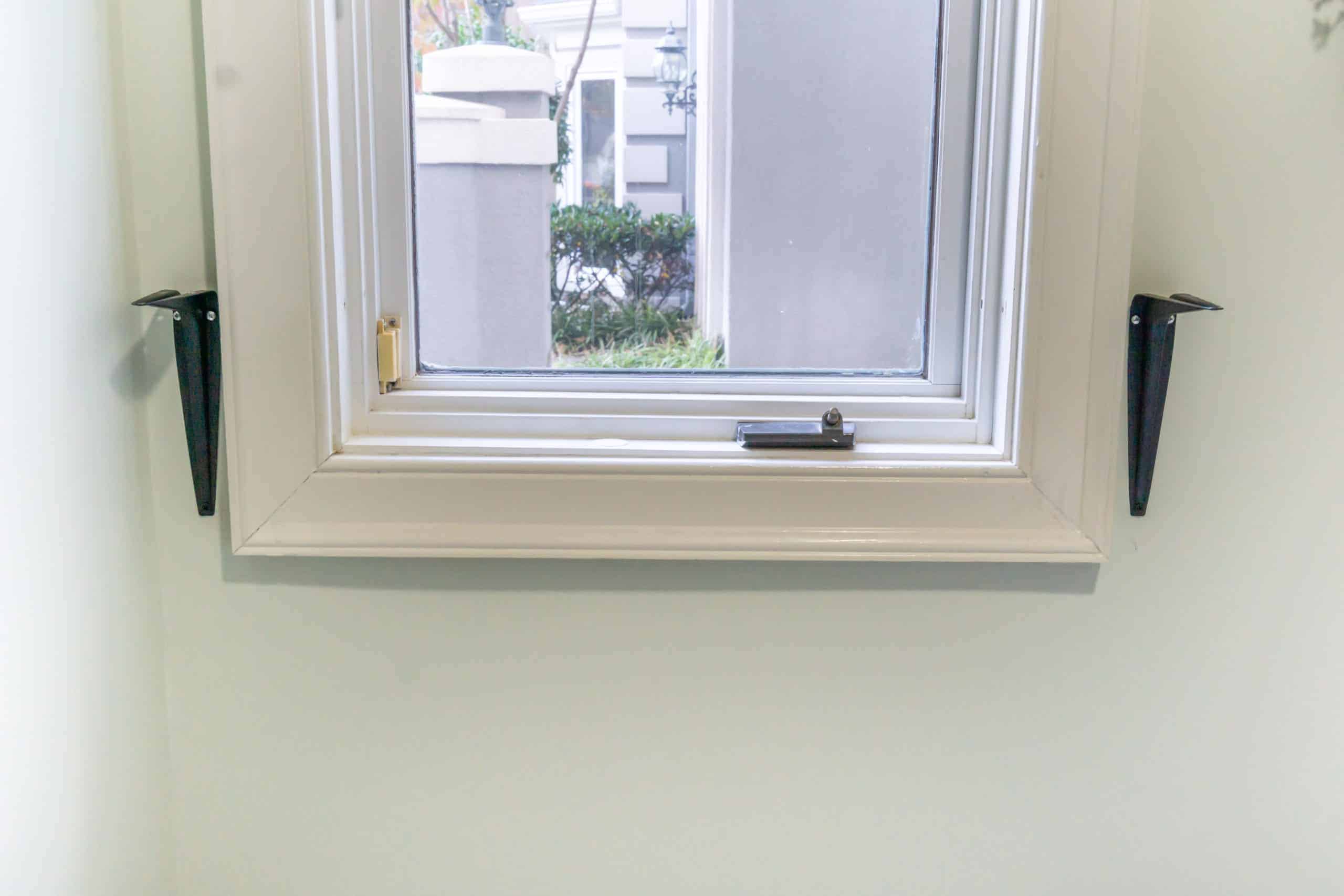 Step 5 – Attach the Board to the Brackets

The last step is just screwing the board onto the brackets.

We marked the underside of the board where the screws would be placed, and drilled pilot holes first.  Then, we secured the board to the bracket with screws

and that was that! 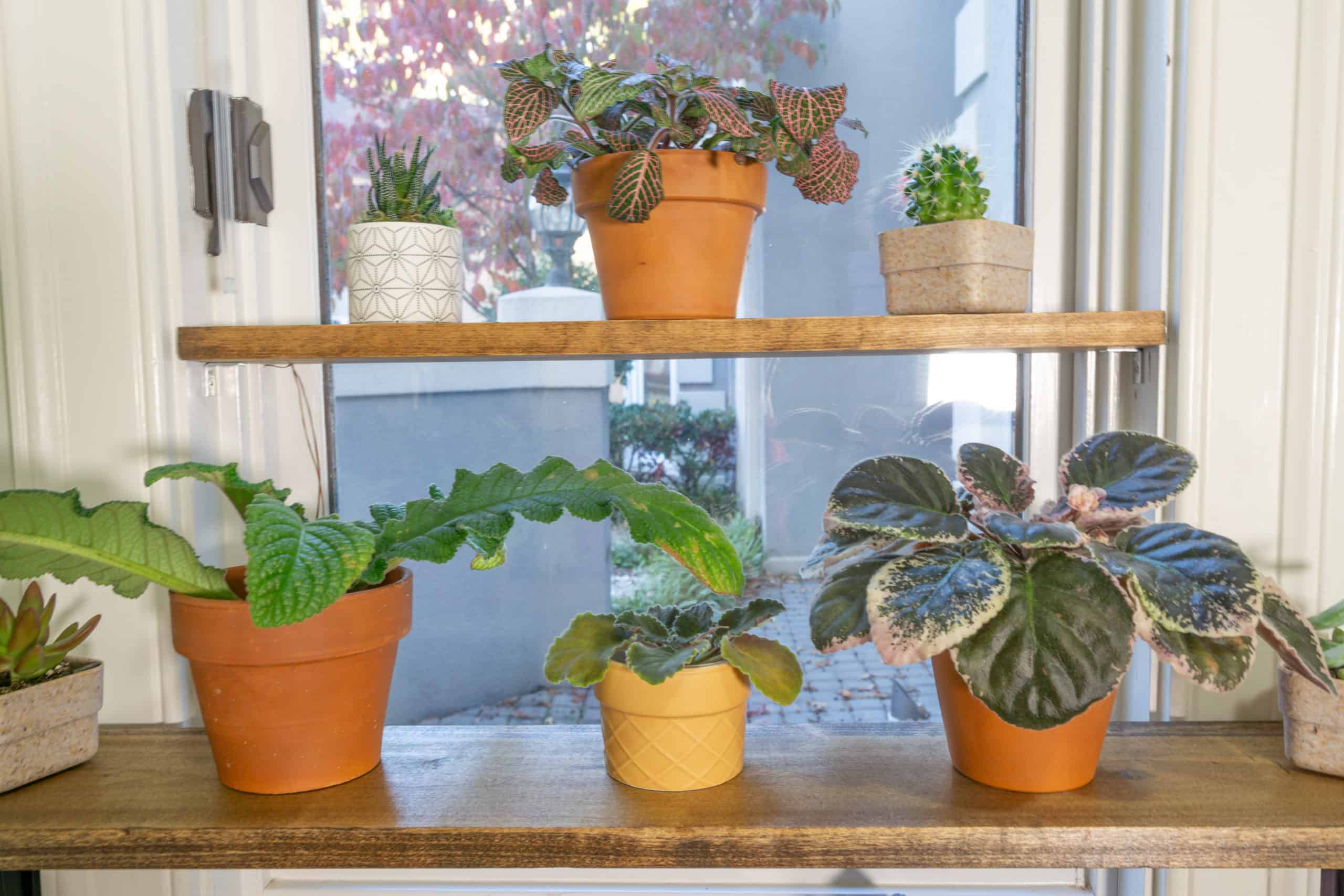 I put the inside mounted shelf in quite a few months ago, and unfortunately, I don’t have any pictures of the process.

It was pretty simple, though.  The biggest difference was cutting the edges of the board.  There is a fair amount of molding on our windows, so cutting was a bit more involved. 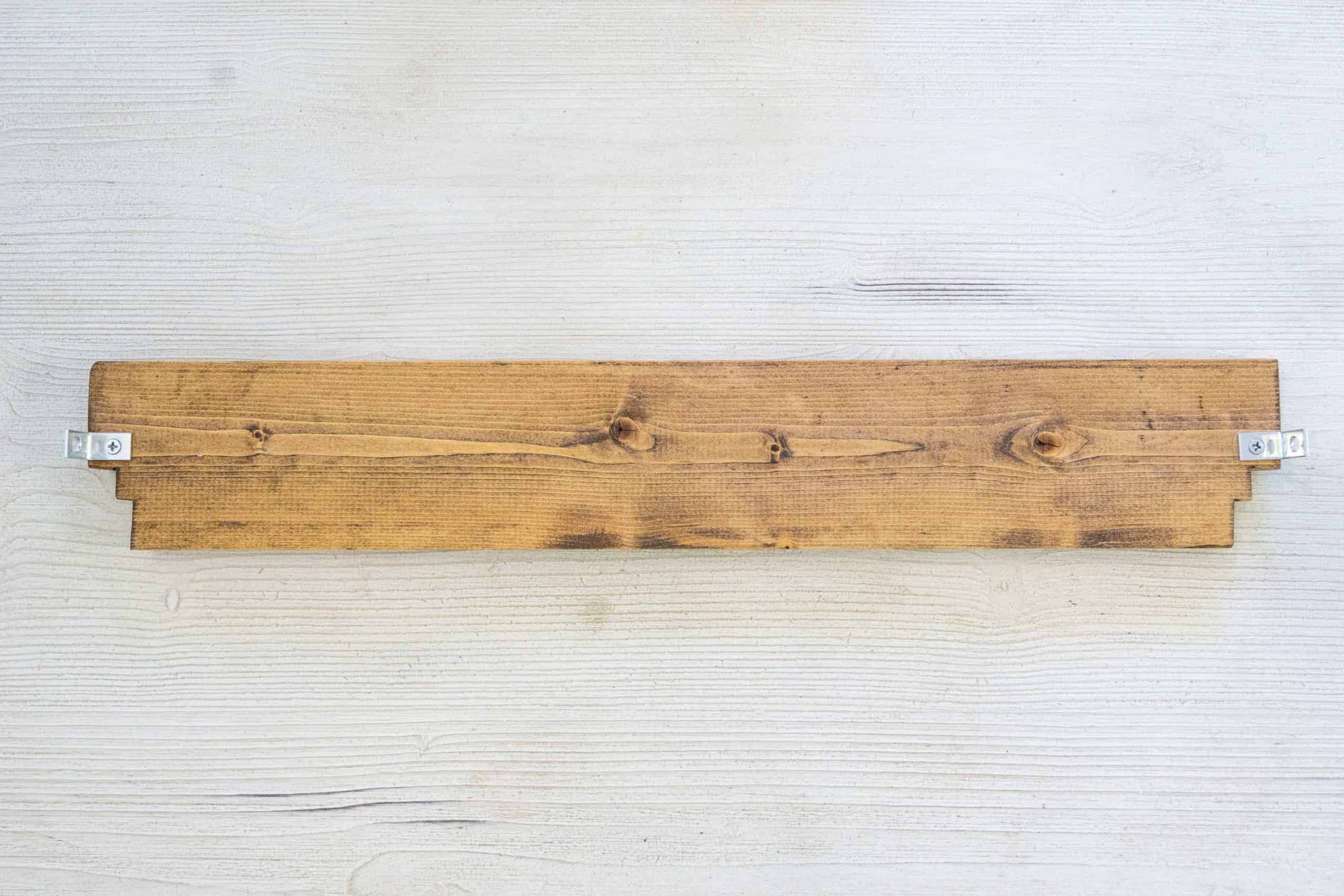 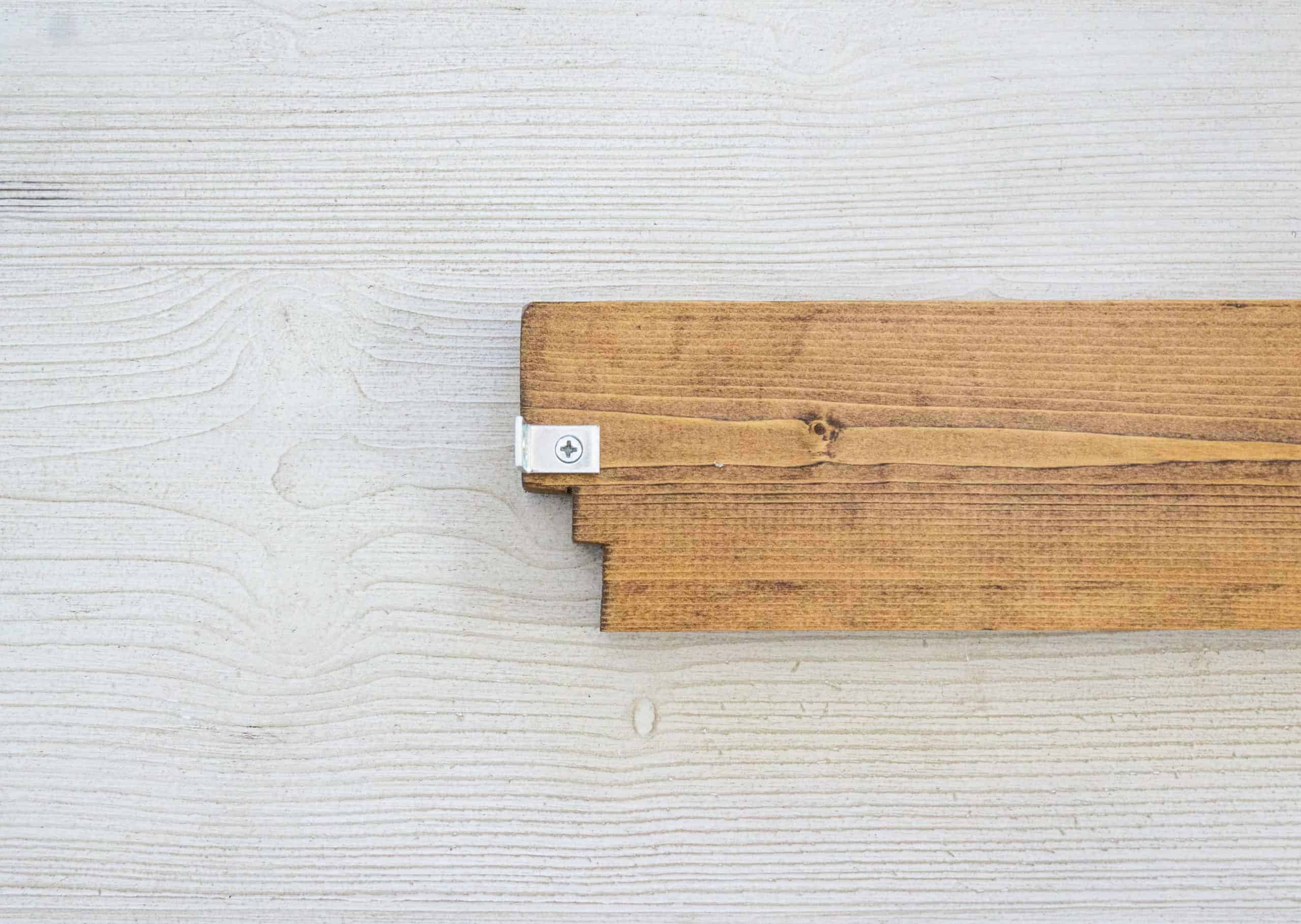 It required a few extra cuts on the ends, but the staining process was the same.  And installation was a snap with this shelf.

We used one simple L-bracket on each end.

Make sure that your shelf is level and screw directly into the window frame. 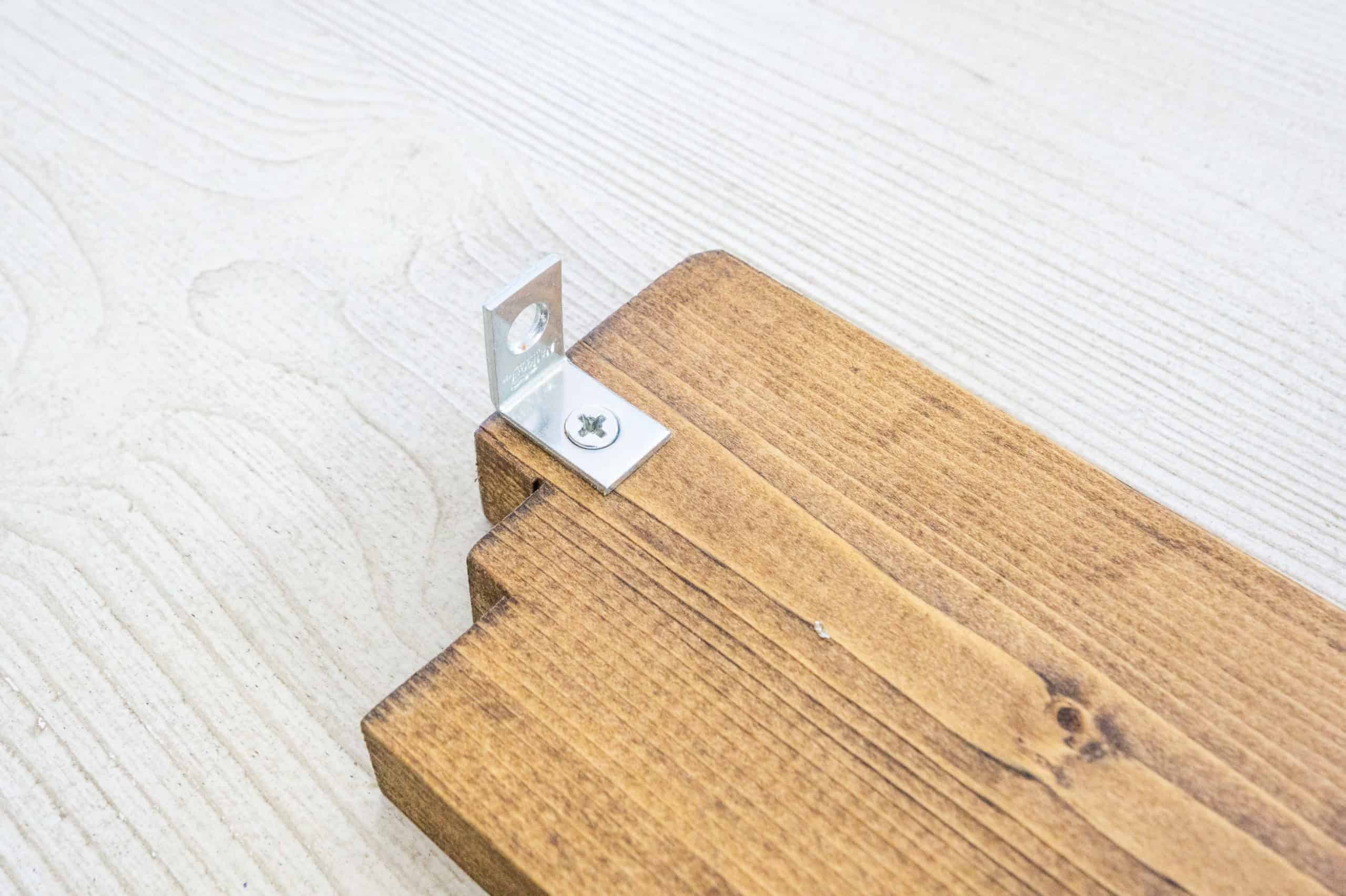 Now that I have given you two different ways to install, there’s no excuse to not put up your own window plant shelf right now. 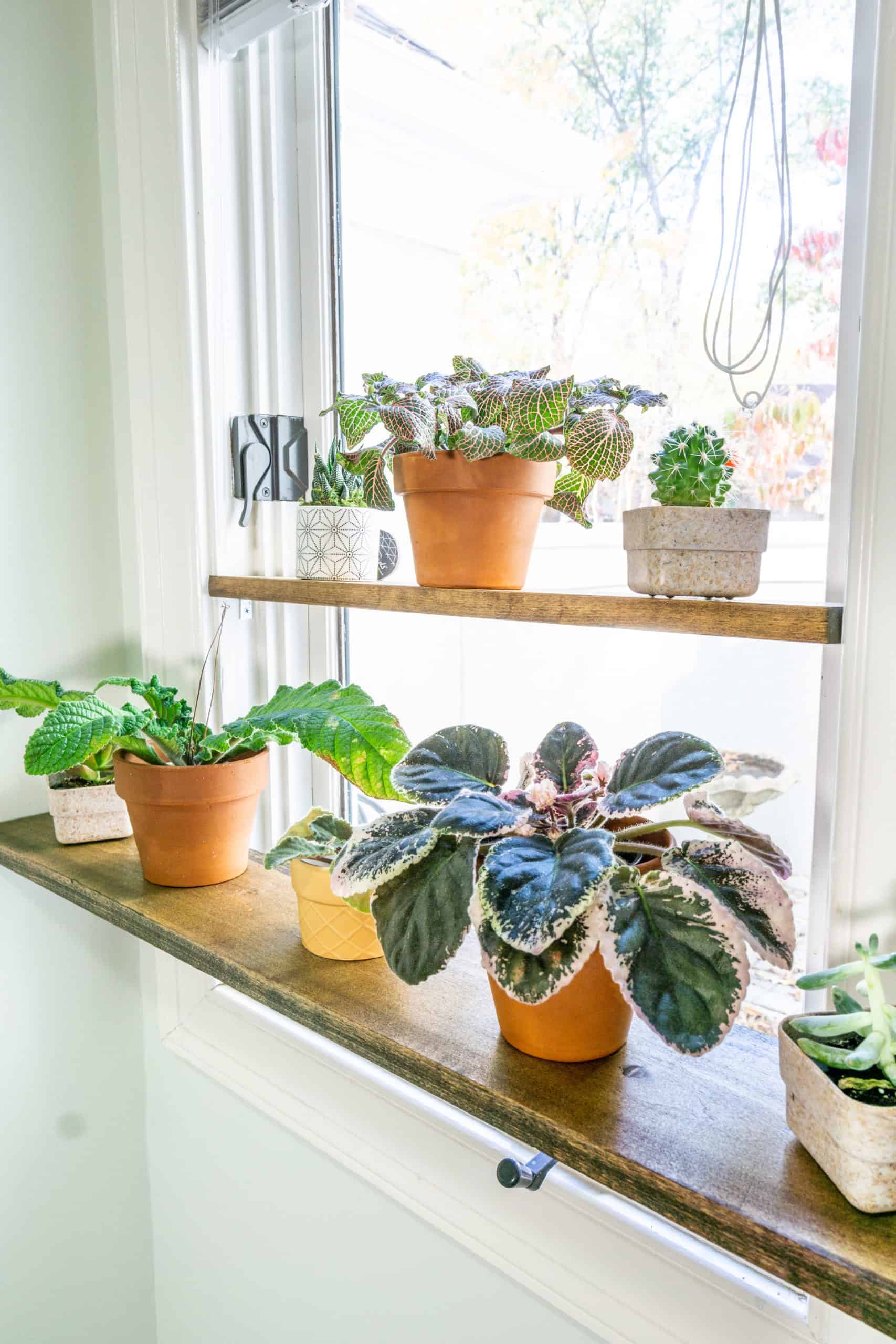 What do you think?  Do you have a designated spot for your house plants?

Don’t forget to pin this for later! 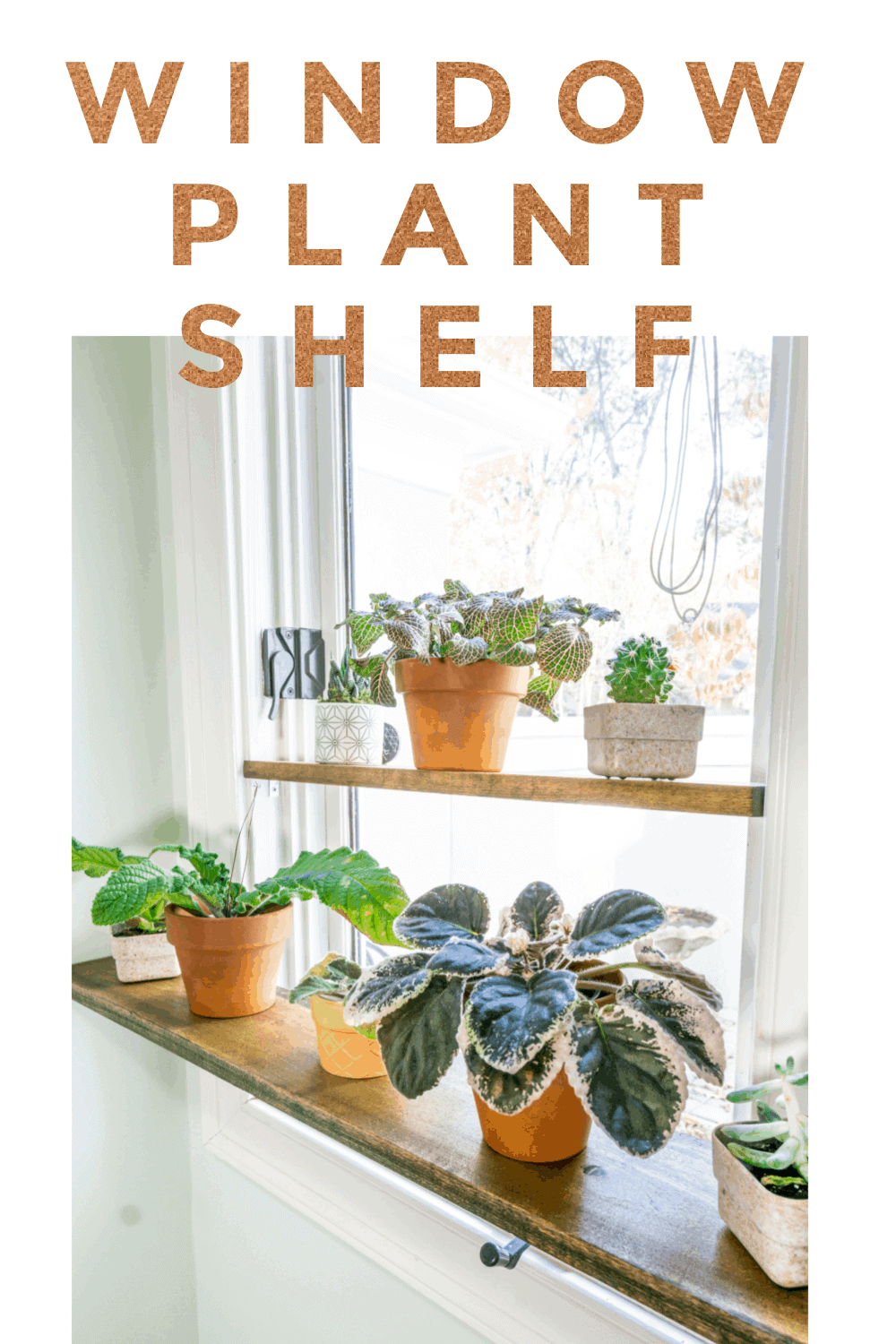