Check out this step-by-step tutorial for a DIY stuffed animal zoo.  You can now corral and contain all of your kids stuffed toys in the most adorable way!

If you have kids, it’s probably a pretty sure bet that you are overrun with stuffed animals.  I know that we are.  Kids love them, and they are easy gifts.  So, it’s not hard to quickly feel like you’re drowning in cuddly plush.  Fortunately, I’ve got a super cute storage solution for you.  I saw this picture on Pinterest a while back, and knew that I had to have one – a stuffed animal zoo. 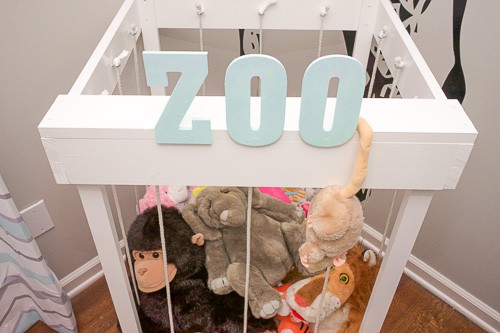 My parents came down to visit last May, and my dad helped us renovate our stairs.  Before they came, I sent my dad that Pinterest picture and asked him if we could put something like it together while he was here.  He went one step further, though, and showed up with all of the pieces cut and ready to go.  So, all my husband and I had to do was put it together!

My dad followed the plans that the pin laid out, and cut the boards according to those measurements.  Truthfully, I hadn’t even looked at the plans that in depth.  I just saw the picture and asked if we could recreate something similar.  When my husband and I went to put it together, I realized that if we built it according to instructions, it was going to be quite large.  So large, in fact, that it wouldn’t fit through our doorways once assembled.

So, we took an entire foot off of the dimensions – height, width, and depth.  I’m so glad we did this, as it’s a much more manageable size, yet we are still able to fit tons of stuffed animals in it.

The first thing we did was put four of the 1 x 4 pieces together to form a square.  Luckily for us, my dad had already drilled pilot holes for the screws. 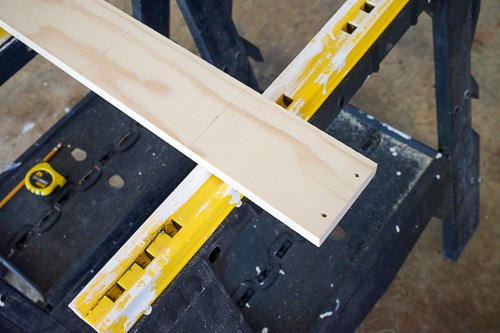 Since we cut the boards down a bit, though, we had to drill

pilot holes in the other end ourselves. We drilled them half an inch in from the edge of the board. 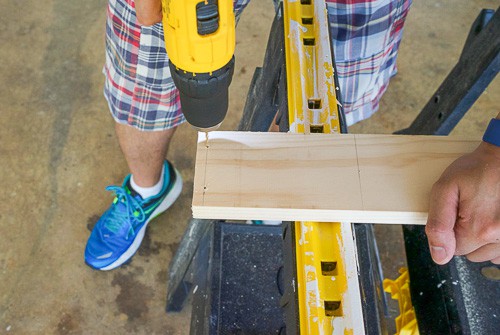 Then, using 1 5/8″ coarse screws, we drilled the four boards together to create a square. 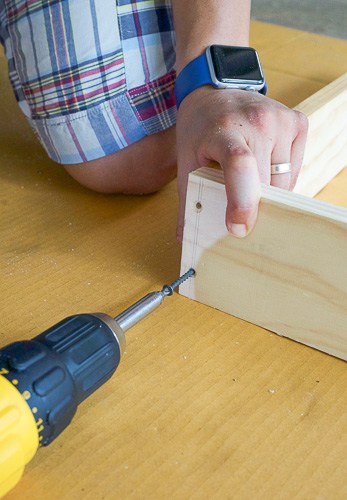 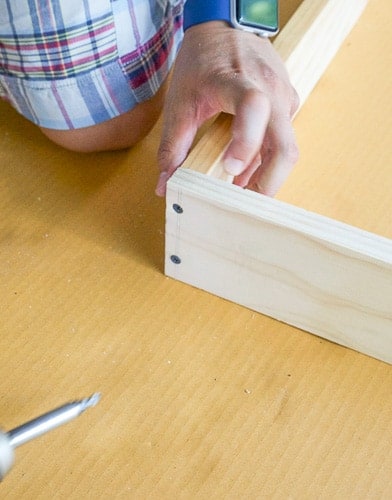 This ended up being the base of the zoo.  Then, we did the same thing with four more of the 1 x 4s to create the top of the zoo. 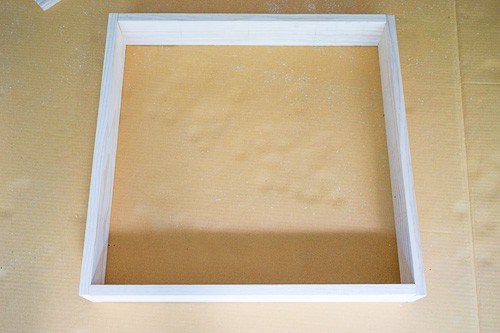 Next, drill a 1 x 2 piece into each corner of the square base using two screws. 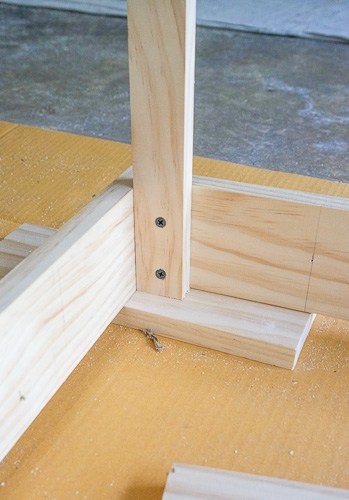 My husband propped the whole piece up on spare pieces to make it more level and easier to reach. 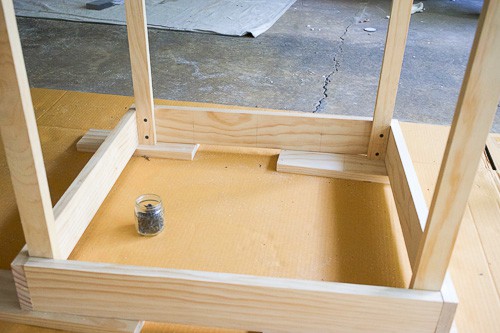 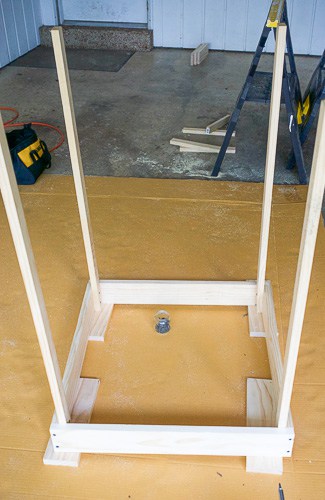 Then, we turned the whole thing over, and set the tall posts inside of the second square (the top).  This made it easy to screw the 1 x 2s into the top part of the zoo. 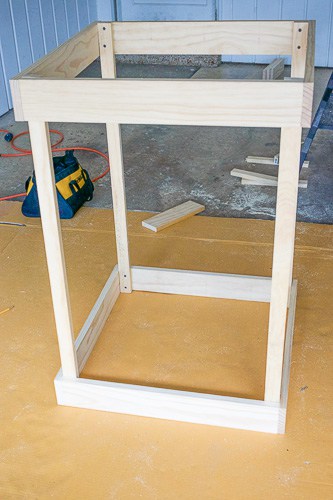 Once that was done, we added the final 1 x 4 laying flat across the top front of the zoo.  In the original pin, this piece was added to hold ceramic animals on the top.  I never could find any animal figurines that I liked to add to mine, but we went ahead and put the top piece on anyway.

When the entire structure was built, I began painting.  We used Sherwin Williams Pro-Classic oil-based paint in extra white. 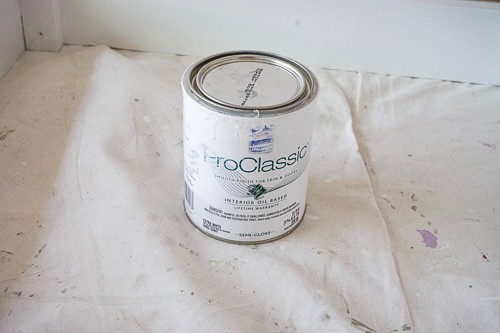 I put three coats on it, and let it dry completely. 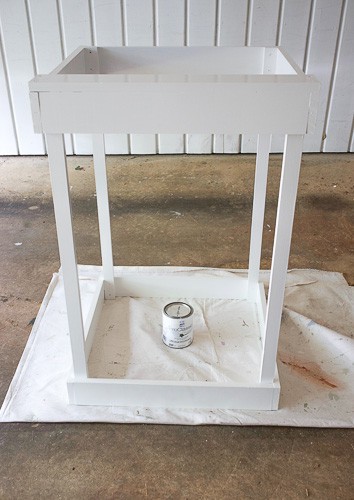 Once dry, it was time to add the rope “bars.”  My dad had also graciously created pilot holes for the screw eyes

We got each screw eye started by hand… 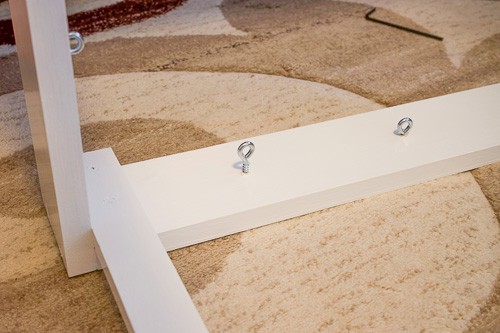 But found that it was easiest to use an allen wrench to screw them in completely. 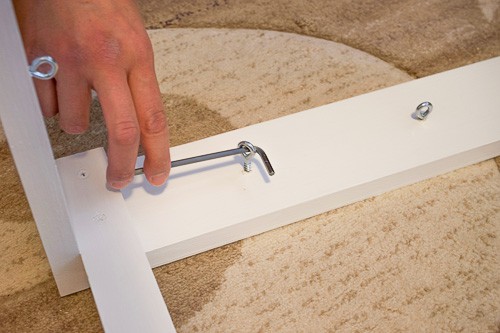 Then, we cut 12 pieces of nylon rope

.  We cut them quite a few inches longer than necessary, in order to ensure that we had enough to tie each end off.  We threaded the rope through one end and tied a knot. 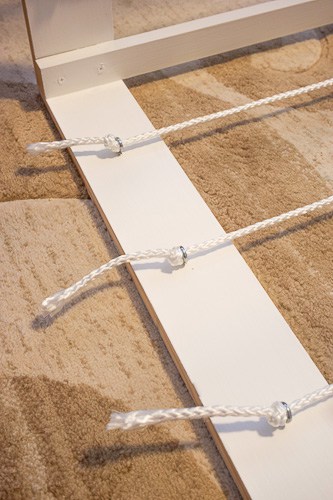 Then, we threaded the rope through the other end.  Pulling the rope as taut as possible, we put a knot in the other end.  Then, we cut off the excess rope and hot glued the ends to prevent fraying. 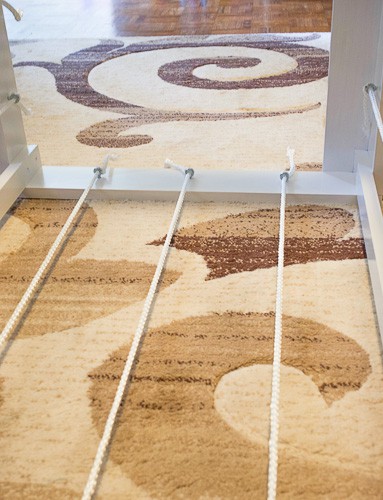 Finally, I had picked up some wooden letters at Michael’s and spray painted them teal to match the nursery.  I simply used a small nail to attach each letter to the face of the zoo.

I think it turned out absolutely adorable, and it’s been a great way to help contain all the stuffed animals.  The one thing I may change is the ropes.  They get stretched out very quickly, so I plan to switch them out for some type of bungee cord that won’t lose it’s shape. 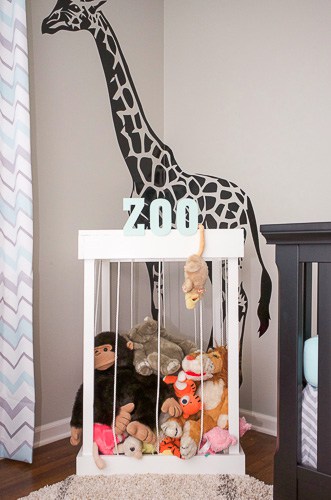 My daughter is loving it so far, and so am I! 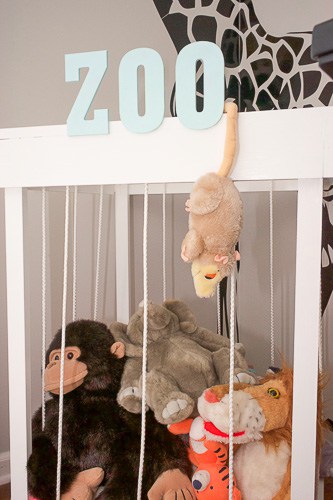 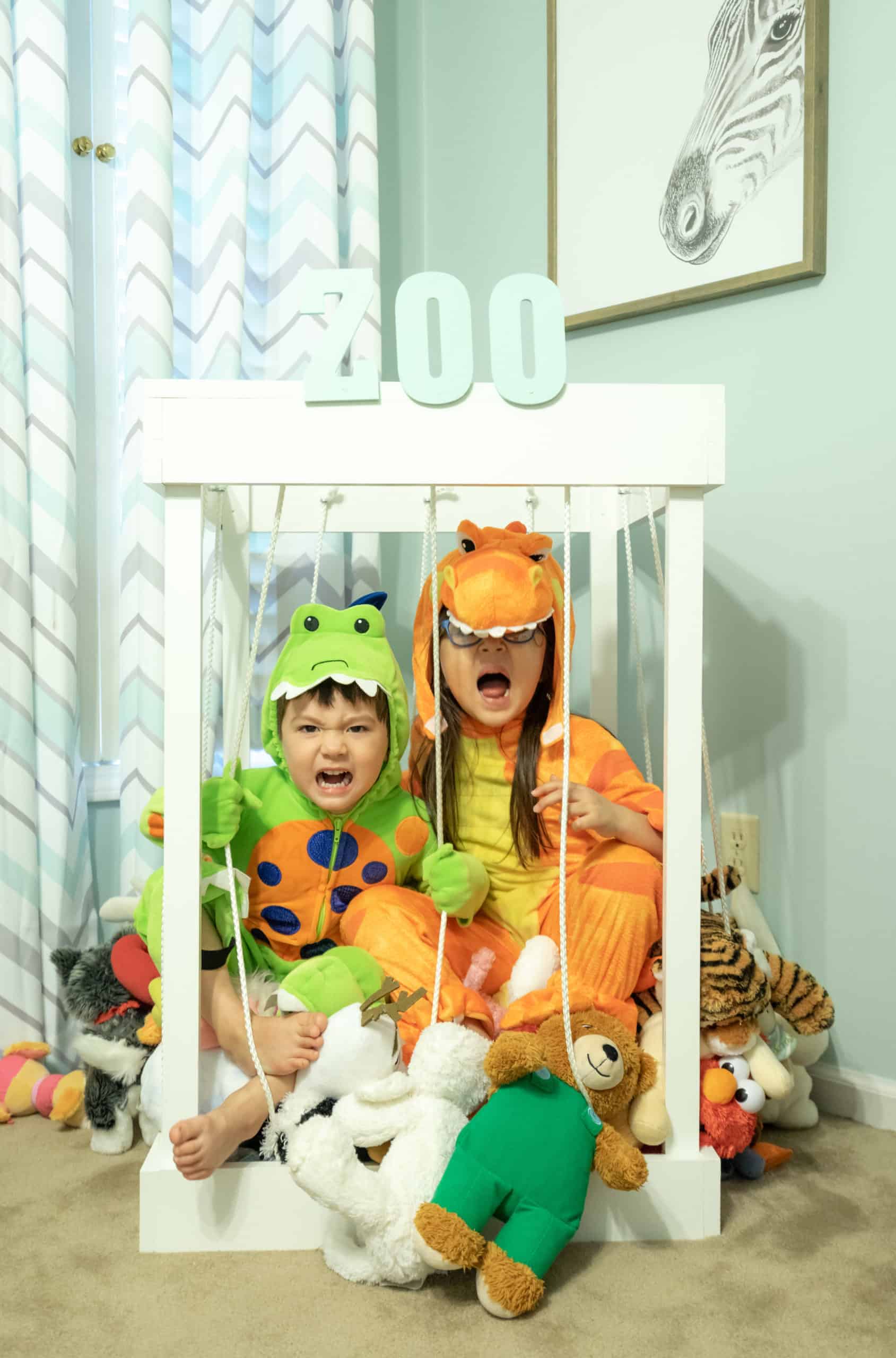 It’s been nearly two years since we built this.  We’ve moved into a new house, lived through 2020, done countless DIYs and home projects, and this stuffed animal zoo is still going strong!  It holds so many stuffed animals – as well as live ones 😆 – and has been great for organization.

*I would definitely recommend going with bungee cord for the ropes, though, over what I originally used, as they stretch really badly over time.

Other than that small tweak, though, this has been a super useful, and fun!, DIY for going on two years now. 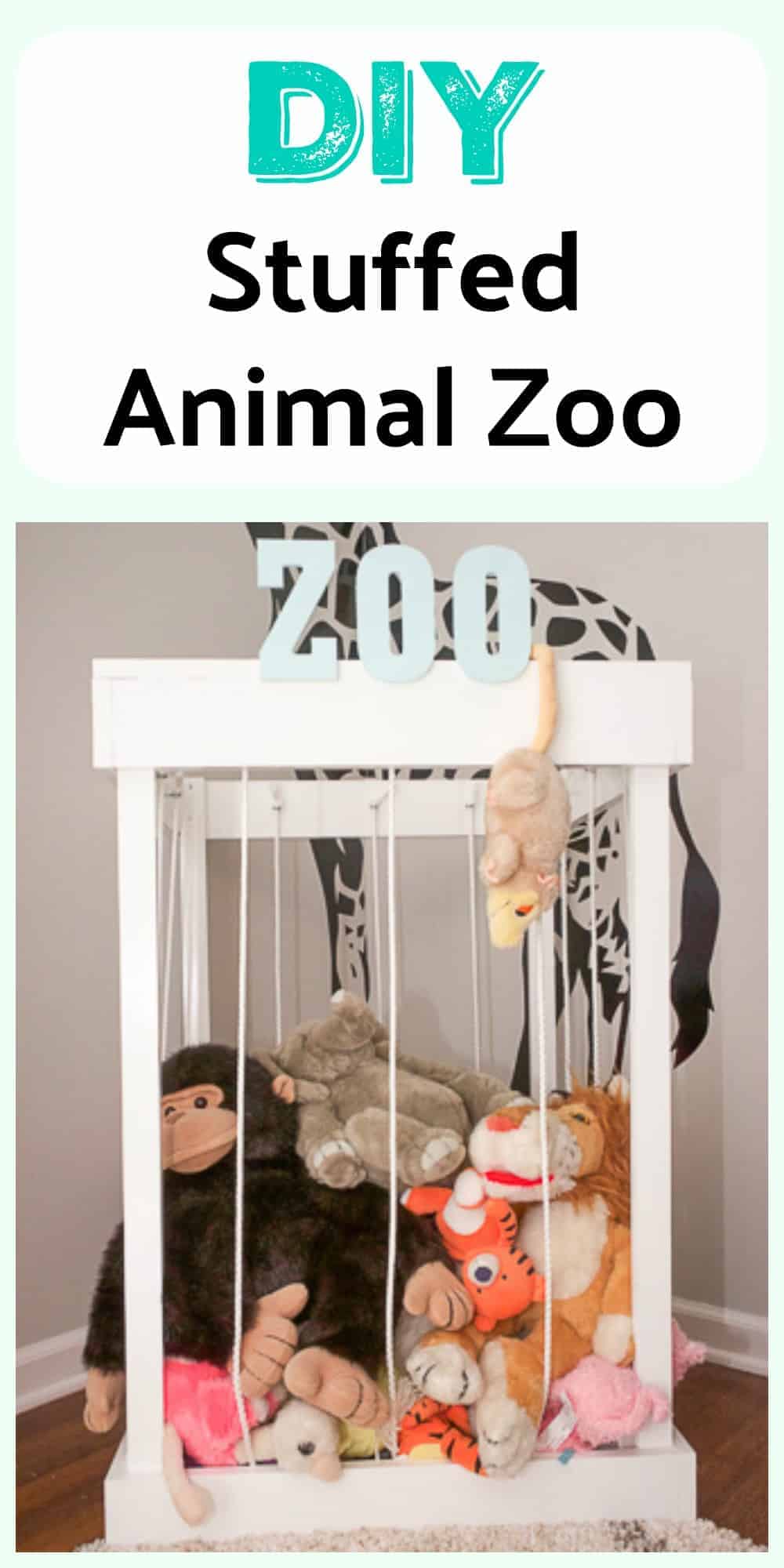