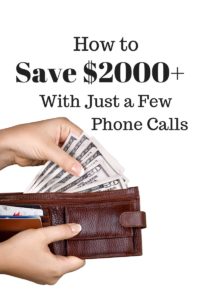 I’ve always been a pretty thrifty person.  As I have grown older, and my responsibilities have become greater, my need to spend money wisely has only increased.  I am always looking for how to save money, or cut back on expenses.  So, this month, I was thrilled when I was able to cut my expenses for the next year by over $2000 with just a few simple phone calls.

Here’s how I did it.

Cut Cable – Wait!!  Don’t stop reading just yet.  I’m sure many of you are absolutely horrified by this idea, but at least hear me out.  I had to spend some time bringing my husband around to the idea, so allow me to spend some time doing the same for you, as well.

First off, we have had a monthly subscription to Netflix for years now.  This allows us to access tons of free movies and TV series whenever we want.  Netflix has definitely been responsible for a few (okay, maybe more than a few) late-night binge-watching sessions at my house.  We have also had a subscription to Amazon Prime for a couple of years now, which also offers lots of movies and TV shows for free with the subscription.  So, even without cable, we have a ton of options at our disposal.  My husband was not keen on losing access to the major networks though.  So, I agreed to purchase an antenna (modern day rabbit ears), in order to pick up the major networks.  We (i.e. my husband) chose the Mohu Leaf 50 TV Antenna, and it has been working great so far.  It cost just under $58 from Amazon, which ended up being a bit over $63 with tax.

By ditching cable, we saved ourselves approximately $47 per month.  This equals $564 over the course of a year.  If you subtract the money we spent on the antenna, it comes to a grand total of $501 saved.

Cancelled Gym Membership – I’m fairly confident that I’m not the only one who has had a gym membership sitting unused for months now.  My husband and I are fairly active people.  We like to bike and run, but we prefer to do it outside.  Why did we have a gym membership to begin with then?  Two words.  Child care.  It’s difficult to get outside for a workout when you have a baby/young toddler to worry about.  We initially thought that having built in child care at the gym would help us to workout more regularly.  Instead, we have spent month after month wasting money on a membership that we just don’t use.  So, one phone call, and it was done.

Our membership was $79/month, which equals $948 for the year.  No additional expenses here either.  Just money saved.

Shopped around for insurance.  I believe it’s recommended that you shop around and get insurance quotes every 1-2 years.  We still have the same insurance (both home and auto under the same company) that we signed up for 5 years ago, when we bought our house.  So, it was definitely time to shop around and see if we were still getting the best rates.  And guess what, not only did we end up sticking with the company we were already with, but they actually ended up finding us additional savings.  We made just a handful of phone calls to achieve this.

First, we called our insurance company, told them we were shopping around, and asked if they had any ways for us to lower our bill without compromising coverage.  Then, we got quotes from about 4 other insurance companies.  Our original insurance agent came back and said she had found a way for us to save.  By adding an additional policy, we could save $14/month on our car insurance, and a little over $36/month on home insurance.  Our home insurance had already been paid by our mortgage company, so she said that that money would actually come back as a refund in the amount of $435.  This ended up being the best deal, so it’s what we went with.